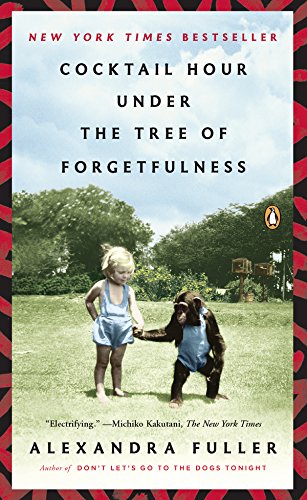 I have recently returned from Zambia and for reading material I decided to take two of Alexandra Fuller’s memoirs.  I have already read ‘Don’t Let’s Go to the Dogs tonight.’  So I took the follow up to that  – ‘Cocktail Hour under the Tree of Forgetfulness,’ and her most recent book, ‘Leaving Before the Rains Come.’

I have heard some controversial opinions about Alexandra Fuller.  Certain people from Zambia seem to dislike her a lot, for reasons I don’t understand.

However, I am only interested in her writing and her books, which I have to say I thoroughly enjoyed.

She lived a totally different life to the one I experienced growing up in Chingola, but that doesn’t make it any less real or authentic.  In my opinion, it takes a huge amount of courage to write as honestly as she does, and her prose is electric with stories of what happened both to her and her family in Rhodesia, as it was then.

‘Cocktail Hour Under the Tree of Forgetfulness’ focuses on the life of Nicola Fuller of Central Africa, as she supposedly refers to herself.   Fuller gives a detailed account of her mother’s upbringing both in Scotland and Kenya, before she moved to Rhodesia and lived through the war there. She writes without sentimentality, as she describes the highs and the lows of her mother’s incredible life.  She also tells of Nicola Fuller’s depressions and highs before she is diagnosed as being Bi-Polar, and how this affects both Alexandra and her sister Vanessa.  Nicola Fuller’s mental health begins to deteriorate after the death of her first child.  More tragedy follows and with each tragedy she disappears increasingly into her own depressed inner world, and withdraws further away from her children.

Fuller writes with devastating honesty, and no matter what she is describing, she is never ever dull.  Her love of Africa and her parent’s love of the continent shine through and help us understand in some small way why they stayed during the incredibly difficult time of the Rhodesian war.  They loved the land – simple as that. For those of us who grew up in Zambia, we can identify wholly with descriptions such as this: “Emerald-spotted doves” calling to one another, frogs “bellowing from the causeway,” the air boiling “with beetles and cicadas, mosquitoes and tsetse flies,” and egrets “white against the gray-pink sky” floating “upriver to roost in the winterthorn trees.”

If ‘Don’t Let’s Go to the Dogs Tonight’ was a scathing reflection of her parents, then ‘Cocktail Hour Under the Tree of Forgetfulness’ is a tribute to a brave but slightly unhinged couple, who were captivated by the harsh realities of Africa, but found their love of the continent surpassed everything else.  Make of that what you will.

I then went on to read ‘Leaving Before the Rains Come.’  Firstly – what a brilliant title for a novel.  Her titles are superb.    This memoir focuses on Alexandra herself and her marriage to an American who she meets in Zambia, Charlie Ross.  Charlie ran rafting trips on the Zambezi river when Alexandra met him and it was a passionate ‘coup de foudre.’

In him she believes she sees stability, protection and all that has been missing from her war-torn, crazy life to date. As she so eloquently states, she projected “onto Charlie’s broad-shouldered frame” an “embellished biography that made him both my sanctuary and my savior. I believed that if I moored myself to Charlie, I would know tranquillity interspersed with organized adventure.” She could remain in Africa because “he loved the romance of it,” and they could remain there safely: “Our lives would be the ‘three rifles, supplies for a month, and Mozart’ of ‘Out of Africa’ without the plane crashes, syphilis, and Danish accent.”

Sadly they are both living under delusions about the other and no-one can be all that.  However initially they cling together in their individual hope and beliefs of the other and they try hard to make it work.

After the birth of their three children, Fuller suffers from a severe bout of malaria and eventually for their own sanity, they move to Wyoming, USA.

Fuller writes so honestly about the breakdown of her marriage, her own sanity and her own shortcomings that you cannot help but admire her.   Well, I couldn’t anyway.

Whatever you may feel about her on a personal level, she writes beautifully about both the beauty of Africa and the trials and challenges of the human condition.  I thoroughly enjoyed both of these books and I would recommend them without hesitation.