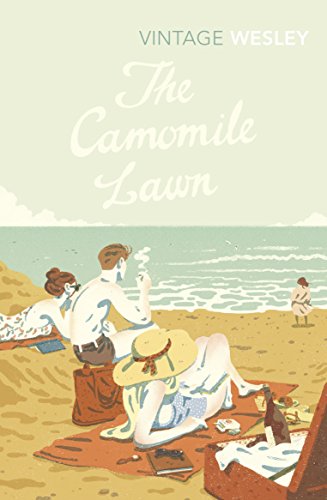 The Camomile Lawn at Amazon

Mary Wesley came to writing late in life.  The Camomile Lawn was first published in 1984  when she was in her seventies, and went on to become a best seller and a Vintage Classic.

I was inspired to read this book by a reviewer from the Irish Times, who wrote an article about books he loved to re-read.  The Camomile Lawn was one of them, and reminded me that I had been meaning to read it for years!   Once I began, I was immediately plunged into the world of Cornwall in the summer of 1939, at the outbreak of World War II.

Told in the third person, the prose is relaxed, yet full of atmosphere and alive with the richness of the characters. We are immediately introduced to five cousins, who gather every summer at their Aunt Helena and Uncle Richard’s house in Cornwall.  There is Calypso, beautiful and detached,  Polly, wise and secretive, Oliver, who is just back from fighting in Spain and not impressed that no-one takes him seriously.  There is also Walter, Polly’s younger brother who is sweet and kind,  and finally young Sophy, who is the daughter of Richard’s half sister.  She is described as ‘small, ten and her appearance had a touch of the Orient.’

It is clear from the outset that the cousins are very close and have spent much of their youth together.  Teenage passions run high.  Sophy loves Oliver.  Oliver loves Calypso and Polly will come to love the twins, Paul and David Floyer – the Rector’s sons who live near Aunt Helena and are great friends of the cousins.

The family are upper class, and in some respects innocent and naive.  The novel follows the lives of the five cousins once the idyllic summer in Cornwall is at an end and war is declared. Oliver, Walter and the twins all join up.  Polly and Calypso also work for the war effort.  There is a lot of sleeping around and living life to the full. Polly later tells her children ‘We lived intensely.  It was a very happy time.’    Monika and Max who are Jewish also play a large part in the story.  Max becomes Helena’s lover (and everyone else’s!) and Monika looks after Richard. Although it is never overtly declared that Monika and Richard are lovers, we assume so, as Helena spends most of her time in London with Max, while Monika takes over the house in Cornwall and minds the eccentric Richard.

The behaviour of all of the characters is amoral.  They sleep around, drink too much and generally misbehave.  But they all play their part in the war effort and apart from Sophy, who is still at school, they work hard and play harder.

Mary Wesley had the gift of bringing the characters to life so well, that within a short space of time, I was invested in their lives. She relied heavily on dialogue, but the novel is none the worse for that.  The dialogue is full of humour and candour. The characters are straight to the point and often hilarious.

Flashbacks reveal what happens to the characters in later life, and everything is neatly tied up at the end, which I also love in a novel.  No flinging this book at the wall in frustration!

I have a feeling this may be a ‘love it or hate it’ novel.  But one thing is certain – it is entertaining.    I would  definitely recommend it.    It is a novel about how one survived during the war.  How one dealt with the cruelty of such a huge loss of life – by finding the resilience and courage to live life to the full, as if living for those no longer present.

Link to the book on Amazon

This book came highly recommended by a friend.  Thank you Michelle!

I love nothing more than when a book transports me to another world and I can’t wait to get back to it. It doesn’t happen to me that often, but this book had me absorbed from start to finish.

Ada Vaughan lives in Threed Street in 1930s London.  She gets a job working for Mrs B as a dressmaker, where she learns her trade.  But Ada is no ordinary worker.  She has a real talent for couture and a flair for fashion.  One evening she attracts the attention of a man named Stanislaus at a hotel, and the two begin courting.  When he asks Ada to go to Paris with him, she is thrilled.  Despite warning of the outbreak of War, Ada sneaks off to Paris with him.  What happens next is more than your worst nightmare.  Ada finds herself alone and abandoned in a city at war.

What I loved about this novel were the rich descriptions of both time and place.  I felt like I was there, and I got a real sense of Ada’s fear and panic.   The writing is lyrical and full of ambiance.    I defy you to not get caught up in this wonderful story of one woman’s perilous struggle to survive through World War II.

Also I will say that the ending surprised me, which always adds to a great read!

My next book is The Camomile Lawn by Mary Wesley.  Review coming soon!