Melissa, Michael, Stephanie and Damian – the four friends in ‘Ordinary People’ have discovered that: “Adult life has fully revealed itself, wearing a limp, grey dressing gown.”

I would suspect there aren’t many married couples with children who can’t identify with many of the sentiments and behaviours found in Evan’s extraordinary novel.

Both couples live in London.  Michael and Melissa in 13 Paradise Row in Crystal Palace and Damian and Stephanie live in Dorking. 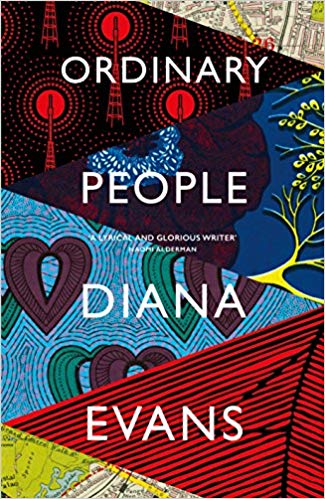 Evans focuses her attention primarily on M&M (as they are known to some of their friends) and specifically on Melissa. She is a freelance journalist, an independent spirit who is beautiful, cool, and feeling utterly suffocated by the chores of domesticity.  An earth mother she is not.  Michael after thirteen years together is still entranced by her, but even he is feeling worn down by life and by Melissa’s coldness towards him. Her unhappiness permeates their life.

Their house is another character in the book and is a metaphor for Melissa’s increasingly fragile state.  The more the house deteriorates, the more her mind follows suit.

Meanwhile Stephanie is a no-nonsense earth mother who adores her children and puts up with her husband.  I felt it was a pity that the author did not spend more time on this couple. They seemed to be making up the numbers a lot of the time, especially Stephanie.  She was the most sensible of the foursome, so perhaps less interesting to the writer, but I would have liked more of her. I admired her resilience and her capacity for getting on with life.

Evans prose is majestic.  She allows the miseries of the characters to unravel slowly, while London is described in Dickensian terms and adds to the stifling, sometimes hectic slightly crazy atmosphere.

Music plays a large part in the novel – indeed the title is taken from a John Legend song which include the lyrics: “This ain’t the honeymoon/ passed the infatuation stage.”

Both couples are also strongly rooted in their heritage.  Melissa feeds her children Eba and follows superstitions passed down from her African mother.

I adored everything about this novel.  The prose is gloriously atmospheric.  The story never felt depressing, just intense, and such a vivid, portrayal of ordinary lives that I was genuinely sorry when I finished it. The characters will live on in my memory for some time to come.  There is also a wonderful slightly bizarre gothic twist towards the end which I didn’t see coming, but which, although surprising, was not at all out of place.

Reader beware though – if you are going through a difficult time in a marriage or a relationship, the intensity may be too much.  On the other hand, it may provide some comfort to read of others’ struggles.   I leave that decision up to you!  For most people (I hope!!) I couldn’t recommend this highly enough.  A wonderful book.

Wandering Ambivert
Reading On A Star
Feed The Crime

Stories and photos from Scotland